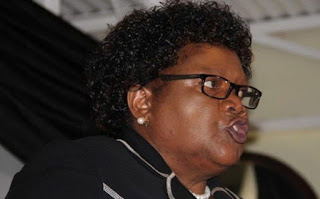 MASVINGO – It never rains but pours for the Joice Mujuru led National People's Party (NPP) as it continues to lose key members with the latest being the national secretary for legal affairs Rodney Makausi and Masvingo provincial chairperson Shylet Uyoyo calling it quits.
In their resignation letters, seen by TellZim News, Makausi and Uyoyo say they have personal businesses to attend to, making them unavailable for party business.
Makausi indicated in the resignation letter addressed to NPP national chairperson Gift Nyandoro that he was parting ways with the party as they have other critical matters to attend to.
"I wish to humbly notify you that I have crucial work which I need to be embarking on to such an extent that I will not have adequate time to devote myself to the party business. It would therefore only be logical that I stand down from my post for someone else to take over.
"I accordingly in the exercise of my constitutional and legal rights to belong to a political party of my choice inform you of my voluntary resignation from the National People's Party," said Makausi in his letter.
Uyoyo's resignation letter addressed to national chairlady Marian Chombo said she was resigning from the party without giving any other reasons.
"Please accept this letter as formal notification of my resignation from National People's Party," said Uyoyo in her letter.
There are however, reports that both Makausi and Uyoyo plan to go back to Zanu PF. Makausi is also said to be interested in contesting for Masvingo Urban constituency.
When contacted for comment Makausi dismissed the allegations as mere bar talk saying his resignation was because he has personal business to attend to.
"I resigned from NPP because I have a lot of business to attend but I want to make it clear that I currently have no interests of contesting for any position in the election," said Makausi.
Uyoyo made a clear hint she intends to retrace her footsteps back to Zanu PF, saying she had left the ruling party because of former President Robert Mugabe, who is no longer there.
"I left Zanu PF because of Mugabe and his wife; but he is now gone," said Uyoyo.
NPP national spokesperson Jeffreyson Chitando said he was unaware of the resignation letters but said the party remains strong despite the current turbulence.
"I am yet to see the resignation letters but all I can tell you is that the party remains strong and committed to bring about the change which is long overdue in the country," said Chitando.
Nyandoro could not be reached for comment by the time of going to print as his mobile was not reachable.local