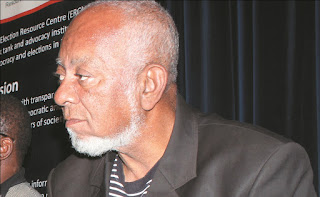 12 Jan 2018 - MWENEZI - Retaining the Mwenezi East constituency in the upcoming general elections could be a very difficult task for Joosbi Omar who was last week jeered by party supporters at a Zanu PF inter-district meeting held at Rutenga Primary School.
The booing occurred during introductory remarks when tempers against Omar suddenly flared after provincial political commissar Jevas Masosota asked members of the party's main wing to stand so that they could be introduced.
When Masosota was about to introduce Omar, the audience responded negatively.
"Hatimudi imbavha uyo wakatinyepera zvakakwana. Hatidyi mapromise isu. Hatina kupusa vana veMwenezi hatichamuda ngaende ngaende pawakadya pakakwana," were some of the shouts from the floor.
Realising that the crowd would not entertain Omar, Masosota intervened and urged members to use proper methods to raise their grievances against the legislator.
The MP, who used to be showered with praises and given chances to address delegates during previous inter-district meetings, endured incessant insults at the meeting and was not given a chance to make even a mere slogan.
During his campaign in the by-election for the parliamentary seat last year, Omar made grandiose promises to the electorate but critics are not impressed by his record yet.politics
Share !