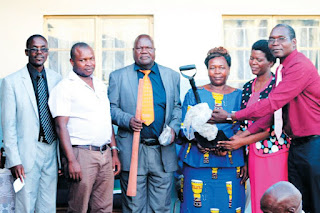 ZVISHAVANE - Nathan Man'ono, a longtime employee in the Education ministry, has retired from his profession, marking an end to a career spanning almost five decades.
Man'ono joined the profession in 1973 at the tender age of 20 and served in the ministry for a solid forty-five years.
He started his career at Wedza Primary School in Zvishavane before moving to Gresham Primary school in the high density suburb of Mandava where he spent the remaining 39 years of his career.
"I grew up as a teacher because I joined the teaching profession at a very young age and I never looked back. I really enjoyed life in the profession because to me, teaching is an inborn thing," said Man'ono during his farewell party.
He encouraged those who are still new to the profession to give it all their best if they want their careers to be enjoyable.
Speaking at the same occasion, Gresham Primary head, Gertrude Matutu said she was impressed by the way Man'ono had conducted himself during his long service at the school.
"I am worried by his retirement because it's going to be difficult to find a replacement who can match his big shoes. The void he is leaving will be very difficult to fill. He was the senior teacher and on several occasions would act both as the deputy head or head.
"I am young enough to be his daughter but the kind of respect he gave me was remarkable. He is the one who showed me the way when I joined this school three years ago," said Matutu.
School Development Committee (SDC) chairperson Brian Magwizi said Man'ono had given much to the school's development efforts.education
Share !