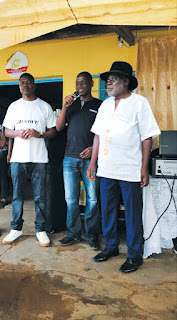 ZAKA - Pocket Rockets Snooker Club put on a spirited fight to win the inaugural Mugove Trophy held at Zaka business centre on December 23, 2017.
The tournament ended on a high note with Pocket Rockets being crowned champions after winning against Northend.
Mhofela and Jerera City came out third and fourth in a competition which attracted interest from the length and breadth of the district.
For emerging the best team in the tournament, Pocket Rockets walked away with a trophy, gold medals and R3 500 cash prize.
Northend were rewarded R2 200 and silver medals for their efforts while Mhofela was awarded R1 000 and bronze medals for their efforts.
The other teams were awarded R500 participation fee.
A total of six teams from Zaka district participated in the tournament with each club fielding their best players to represent them.
The tournament is sponsored by South Africa-based businessman Ciphas Makaza who pledged to continue supporting community sports.
"I am pleased with the participation of all the teams and the passion of our well-disciplined players. I am prepared to make this tournament an annual event so as to continuously nurture the talent of these potentially great players," Makaza said.
The event was graced by Zaka District Administrator (DA) Ndeya Nyede, Zaka Pool Association chairperson Zoggy Chihambakwe and the tournament's sponsorship manager Tatenda Makaza.
The guest of honour at the vent was Richard Makaza who is father to Ciphas.sport
Share !