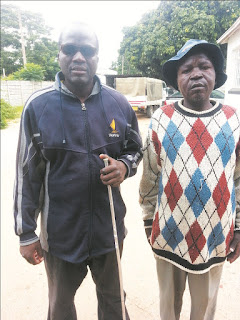 Felix Hungwe and his brother Jeremiah

MASVINGO – A visually-impaired qualified teacher from Mucheke has criticised government for what he said was the deliberate marginalisation of people with disabilities even if they are qualified for employment.
Felix Hungwe, who is a holder of a Diploma in Secondary Education from Mutare Teachers' College lamented that since he graduated in 2015, has not been able to find employment in the civil service.
"It was a tough academic journey for me at Mutare Teachers' College as a blind student but I managed to complete my studies. Since I graduated, I have not been employed anywhere in the ministry though I have applied and sent my Curriculum Vitae (CVs) to the public service and other organisations.
"The ministry only gives first preference to those without any disabilities and we have always been left behind," said Hungwe.
Hungwe, who is also into book writing, has published a number of works like Mazano Pangwawo and Ndihwo Upenyu Hwacho.
He is also working on another book called The Pains and Pleasures of Motherhood.
He did Guidance and Counselling with Zimbabwe National Family Planning Council (ZNFPC) and Say What in 2015 and was helped by his son, Calvin Hungwe, to type his books.
His brother Jeremiah Hungwe helps him to move about.
"There are limitations and restriction associated with this condition of blindness but by son Calvin has helped me to type my books while my brother Jeremiah has always been with me, assisting me to walk and do other things," said Hungwe.local
Share !