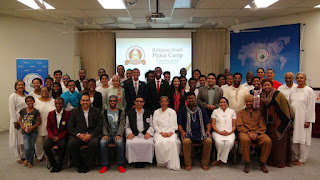 
6 religious leaders representing Christianity, Islam, Hinduism, African Hebrew, Rastafari, and Brahma Kumaris gathered to discuss the topic of "The role of the religions in achieving peace" in attendance with 50 youth from 26th to 27th of November in Durban, South Africa.

This camp was organized by an international NGO, Heavenly Culture, World Peace, Restoration of Light (HWPL), registered in UN ECOSOC and UN DPI and carried out by 6 religious leaders who have participated in the interfaith dialogue meetings called World Alliance of Religions' Peace (WARP) Office.

The Religious Youth Peace Camp is a platform to find the cause and solution of the wars and conflicts that occur due to differences in religion and ideology. It is also a place for discussion on the role of the religions in the achievement of peace.

This peace camp in Durban was the first Religious Youth Peace Camp held in the South African region. The participants experienced various religious programs such as presentations on the culture of each religion and group discussions between religious leaders and youth.

Nishaat Siddiqi, Shaykh of Ansari Tariqa, shared the opinion about the possibility of collaboration with peacebuilding with different religions and thoughts saying "People from all walks of life and faith believed in wonders of God and formed one community. It worked before so I believe it(the harmony of all the religions) can work now."

A volunteer of HWPL said "South Africa has a multi-religion, multi-ethnic society and as such people respect each other, but there needs to be actual peace work. This camp will have served as a reminder of the importance of the role of religious leaders and youth for peace."

The Religious Youth Peace Camp, a part of HWPL's peace initiatives, aims to provide a chance to experience interreligious culture based on mutual respect and open dialogue to the youth around the world. Starting with Cambodia this April, it has been held in several countries including India, Lithuania, Myanmar, and the Netherlands.
Share !