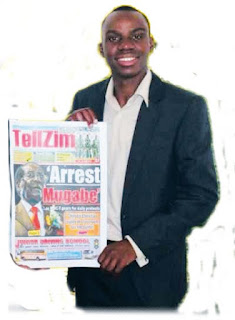 And I heard a voice from heaven saying, "Write this: Blessed are the dead who die in the Lord from now on. Blessed indeed," says the Spirit, "that they may rest from their labours for their deeds follow them, Revelations 14 vs 13.
Psalms 116 vs 15 sums it up saying, "Precious in the sight of the Lord is the death of his saints.
The festive season saw the death of one of TellZim News' former interns Tatenda Shunyai who was a 4:1 student at Great Zimbabwe University (GZU) studying Media and Cultural Studies.
Shunyai joined TellZim News for his work related learning from August 2016 to August 2017.
He died on December 27, 2017 in Harare after some health problems emanating from one of his legs which had undergone surgery in the past. He was buried on December 30, 2017 in Mvuma.
TellZim News editor Passmore Kuzipa described the loss of Shunyai as unfortunate, saying the media fraternity was robbed of promising talent.
"Shunyai had a promising future in the media industry and for the time he was with us, he proved his mettle. We are deeply saddened by his death and we hope he will find shelter in the arms of the Lord.
"We had hoped to work with him later on now that he was about to complete his studies but time would not permit. God had other plans for him," said Kuzipa.
Outside the media, Shunyai was a music lover and was a passionate member of the ZAOGA Mvuma assembly youth choir. He was also a talented performer anchoring the GZU music band which entertains people at such functions as MaDzimbahwe Arts Festival as well as at graduation ceremonies.local