‘Universities should lead to development’ 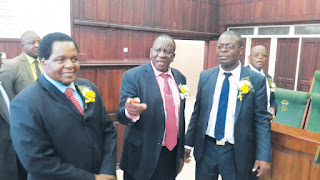 MASVINGO - The Minister of Higher and Tertiary Education, Science and Technology Development, Professor Amon Murwira on Monday held an engagement meeting with Great Zimbabwe University (GZU) where ideas on more qualitative higher education were shared.
In his keynote address stakeholders at GZU's Herbert Chitepo Law School, Prof Murwira urged universities to conduct studies that contribute to national development, promising that resources will be channeled towards collaborative research that bring economic growth.
"Universities must now grow the industry themselves rather than producing graduates to be incorporated by industries that do not exist. The ministry will unveil resources where there is opportunity for development not for basic individual researches.
"Let us think about employing people rather than chasing them away but this can only be achieved through high productivity," said Prof Murwira.
The minister also explained the importance academic freedom in building confidence in the local education sector.
"We want to bring new confidence in our education system by allowing researchers to work alone. We want to respect our academia by avoiding too much interference but they should be productive," Prof Murwira said.
He also emphasised the need to construct high standard infrastructure in tertiary institutions and to have partnership with the private sector for the construction of affordable accommodation for the large numbers of students in the country.
He said the ministry already had engagements with banks in an effort to provide students loans instead of student grants.
"We were depending much on philanthropy; packaging our poverty and selling it, busy writing proposals for donations. Let us desist from that and have a culture of selling opportunities," he added.
Speaking at the same event, GZU Vice Chancellor, Prof Rungano Zvobgo said the institution had collaborations with other universities around the country and abroad.
"We are running a viable agricultural programme in the Lowveld which starts at certificate level going up to diploma level. Now we are offering a degree and the university should have a radio station in few months to come," Prof Zvobgo said.education
Share !