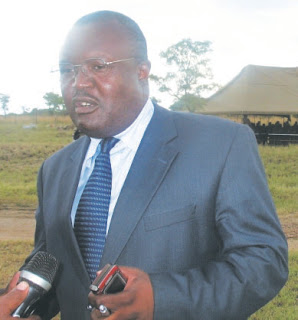 GWERU – President of the National Council of Chiefs, Fortune Charumbira last week said traditional leaders had grown tired of former President Robert Mugabe such that they could not wait to see his back.
Charumbira was speaking at the Zanu PF conference centre in Gweru during the handover of brand new vehicles to chiefs by President Emmerson Mnangagwa over the weekend.
"As chiefs, we are Zanu PF. This is the party we have always rallied behind and will always follow and support. There have been ups and downs in Zanu PF but because we are Zanu PF, we just follow what the party gives us.
"If they give us a lame president, we will just support him and when a good president comes, we will still support the party. During Mugabe's time, we had already seen that there is no future but we just followed the leader who had been chosen by the party," Charumbira said.
He claimed that chiefs had played their own part in the removal of Mugabe from power.
"Now we have a new administration which we had long foreseen with Mnangagwa as Zim 1 and Chiwenga as Zim 2. We are ready to support them as we did when we had Mugabe removed from power," he said.
He continued his rumbling speech even though a note advising him to stop had been slipped to him by traditional leadership director, Felix Chikovo.
"I am receiving a note here that I am I must censor my speech as I am live on broadcast but I won't because the world should know the truth.
"I also want to thank this new dispensation for being truthful as the Mugabe regime was full of lies. We were promised these vehicles way back but nothing materialised. I wonder where their ethos were, kunyepera varume vakuru, vanoremekedzwa vakadai," said Charumbira.
Section 281 of the constitution forbids traditional leaders from being members of any political parties, acting in a partisan manner and furthering the interests of any political party.top news
Share !