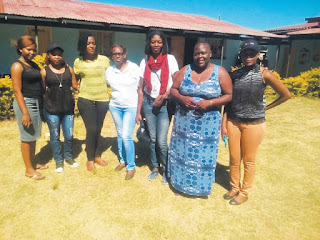 MASVINGO – Local women empowerment group, Women of a Kind last weekend became one of this year's earliest organisation to extend a helping hand to Alpha Cottages Scheme Children's Home with a visit to the shelter.
The group, led by one of its co-founders Gamuchiurayi Gutura, donated foodstuffs including sugar, cooking oil, floor and soap as a way of contributing to the welfare of children housed there.
The children's home will also get a total of US$100 worth of goods from Victoria Bakery after the civic organisation paid the money in advance.
Members of the group also took time to interact with the children, tour their facilities and get an appreciation of possible areas of intervention.
Gutura later told TellZim News that Women of a Kind will continue to work for the improvement of welfare at Alpha Cottages and other charity cases.
She said the group had noticed that there were very old utensils being used at the home despite the fact that such items can be replaced at minimal cost.
"It was a pleasure to interact with children at Alpha Cottages and contributing something to their sustenance. Ours is an organisation of women who want to make a difference in the lives of fellow women as well as the less fortunate members of our society.
"Our objective is to see to it that we continue mobilising the zeal to help others and to uplift ourselves as women. We are not yet done with Alpha Cottages for we will surely work to make sure that the children have the better of such things as bedding, cutlery and other utensils," said Gutura.
Women of a kind was formed by Gutura and her sibling Lindiwe with the goal of providing women with a platform to find ways of tackling issues that affect them in common.
Though it is headquartered in Masvingo, the group has a national reach and is using social media to reach out to like-minded people in the diaspora.local
Share !