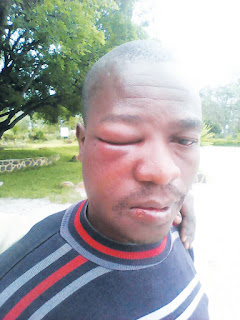 Amos Kumire after the attack

ZAKA – Movement for Democratic Change (MDC-T) Zaka East youth chairperson Amos Kumire is lucky to be alive after he sustained severe injuries during an assault by five people alleged to be Zanu PF supporters.
The police could not be drawn into commenting on the matter which they said was due for the courts although the case was not heard in the Zaka Magistrates' Court on Monday reportedly because the magistrate was away.
Kumire told TellZim News he was asked by prosecutors to wait for a medical report being done in Harare to be put together with the first one done at Musiso Hospital where he got admitted soon after the savage attack.
He said he was convinced the assault was political, adding that he knew the assailants very well.
"I was attacked by people that I know very well (names supplied). One of them invited me to his home to collect cotton fertilisers and chemicals that he had previously denied me saying it was not meant for MDC people.
"When I got there with my wife, he said he wanted to show me what Zanu PF was capable of doing. He hit me with a fist and when I tried to run away, I was ambushed by his other friends who were hiding near the homestead," said Kumire.
MDC-T Ward 19 councillor, Peter Imbayarwo said he personally rushed Kumire to Musiso Hospital where he was admitted for several days.
"He was assaulted by five people whom he said he knows and I rushed him to the police to make a report before proceeding to hospital," said Imbayarwo.local