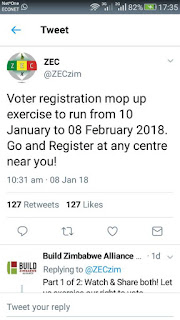 MASVINGO – The Zimbabwe Electoral Commission (ZEC) Masvingo province last week held a meeting with political parties that are represented in parliament to exchange ideas on the Biometric Voter Registration (BVR) mop-up exercise which will end on February 08.
ZEC provincial chairperson, Zex Pudurai said the meeting with political parties went well with all stakeholders raising their concerns especially around the issue of new registration stations.
"We conducted a meeting with political parties that have representation in parliament to discuss the BVR mop-up exercise and opening of the registration centres," Pudurai said.
Masvingo province has been allocated 40 kits and each district will have three teams except Bikita district which will have two teams. A total of 333 centres are expected to be covered in the new campaign.
"We agreed on a working plan to allocate the kits at Registrar General offices around the province but in case of other needs that may rise, we can always look into that," Pudurai said.
ZEC has since reduced its target of seven million registered voters for the whole country to five million, after registering nearly 4.9 million voters in the initial blitz.
The commission highlighted that the new initiative did not signal the end of the registration process, but a cut-off date that enables it to prepare a provisional voters roll.
The number of those registered to vote in the province in the province as on January 10 was 545 442, with 226 222 of them being male with 319 220 female. A total of 11 604 prospective registrants were turned away for various reason.local
Share !