Home » Local » Zvishavane traffic cops back to their corrupt ways?

Zvishavane traffic cops back to their corrupt ways? 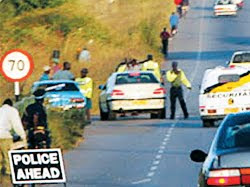 ZVISHAVANE - Taxi operators in the town are complaining that traffic police officers have resorted to their old habits of fleecing road users despite the new government's efforts to fight corruption.
Taxi operators and other motorists plying the Gweru - Zvishavane highway said officers who man a roadblock at Mtonjeni are demanding a US$5 bribe to avoid delays or having their vehicles impounded for spurious offences.
"They come in the morning and mount their road block at Mtonjeni and they threaten to impound your car unless you unconditionally pay the $5. They just do this for about three or four hours and they go," said one taxi operator.
Another one said the police sometimes team up with the Vehicle Inspectorate Department (VID) to extort more money from motorists.
"In the morning, the police demand $5 and in the afternoon, the VID officers also come to the road and they demand $10," said the motorist.
Midlands provincial police spokesperson, Assistant Inspector Ethel Mukwende promised to investigate the matter and come back with a response but had not done that by the time of going to print.
"I will come back to you when I get enough information," said Ass Insp Mukwende.local
Share !