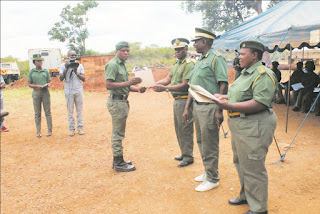 MASVINGO - The Zimbabwe Prisons and Correctional Services (ZPCS) recently held a graduation ceremony for 22 Correctional Officers Grade Three (CO3s) who completed their Supervisory Course Number 1 of 2017 at Mutimurefu Prison.
The graduands were drawn from various ZPCS stations around  the province to undertake the three-month course specialising in prison administration, security management and civic education, prosecution, records management, management concepts, human rights as well as drill and weapon training.
Addressing the graduands, ZPCS deputy commissioner general (DCG) correctional services, Moses Chihobvu said the course was significant in moulding officers to be competent supervisors.
"We expect graduands to exhibit fundamental operational knowledge, skills and attributes required to enable them to execute supervisory roles within our prisons and correctional institutions," Chihobvu said.
He explained that the course was a deliberate effort to produce correctional officers capable of delivering effective first level supervisory ethics and standards focusing on achieving goals of the organisation.
The training programme was affected by financial problems due to the prevailing economic crunch which continues to affect all institutions across the country.
"We would like to applaud the trainees and the supporting staff for soldiering on in spite of the difficulties and challenges that could have stalled progress during the training programme.
"We are all aware that funding remains a challenge given the country's prevailing economic snags. The service is also not spared of the financial constraints but these graduands remained resolute and focused on achieving the goal," Chihobvu said.local
Share !