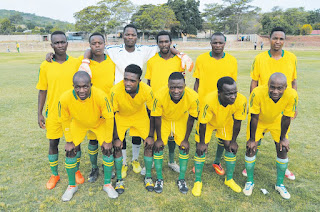 The Division 1 side Bikita Minerals FC has begun its pre-season trials in preparation for the 2018 soccer season with high hopes of making it into the league of the big boys, the Castle Lager Premier Soccer League (PSL).
Bikita Minerals FC, who debuted in the Division 1 last season, held a two days trials session at their Lithium stadium last week where over 30 potential players went through a rigorous training exercise to be considered to join the club.
Head coach John Phiri said they successfully held trials and was overwhelmed with the response and confirmed that they had a number of players they were targeting to sign for the upcoming season.
Phiri could not disclose the names of the players who were shortlisted for the 2018 season saying the board had the final say.
"We had a successful trial session last week but at the moment I can't disclose the names of the shortlisted players because we are waiting for the board's approval," said Phiri.
Having been promoted to the Division 1 last season, Bikita Minerals FC failed to live up to the expectations as they managed to win only three of their 30 games and drawing 14.
The Lithium miners, as Bikita FC is affectionately known, were low lying last season finishing two places above bottom placed United Lions FC.
The club is expected to retain most of its players with the likes of Hardlife Chitambo, Courage Bere and former Masvingo united defender Pardon Chinungwa expected to lead the youthful side.sport
Share !