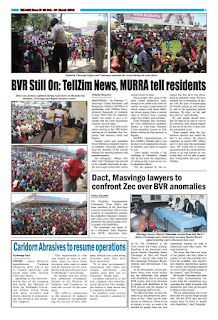 MASVINGO – On February 17, Masvingo United Residents and Ratepayers Alliance (MURRA) in partnership with TellZim News, attracted thousands of residents to their 'BVR Still On' roadshow which was meant to give a reminder that the voter registration exercise was still open.
The road show was held at four places starting in the CBD before moving on to Mucheke Bus Terminus, Sisk business centre and Rujeko.
Famous actor and comedian David Mubaiwa, popularly known as Sabhuku Vharazipi, helped to keep the attention of the crowds through his amusing postures and pronouncements.
His colleagues, 'Mbuya Mai John' and 'Chairman' also proved to be valuable drawcards as people were eager to hear their voices and get closer to them.
Some people who came to the show found themselves lucky enough to be called to the front for various on-stage competitions by which winners took home different prizes among them a current copy of TellZim News, washing soaps, key holders and calendars.
From Mucheke Bus Terminus, the voter mobilisation roadshow headed to Chesvingo Business Centre popularly known as Sisk before making the final journey to Rujeko.
MURRA communications officer Godfrey Mtimba said it was the duty of all responsible citizens to mobilise each other to register to vote.
"Voter apathy remains a big challenge in Zimbabwe. People still do not know the importance of voting so this is part of our voter education efforts.
"We are pleased by the response that this drive has stimulated on potential voters. We have reached out to thousands of people with the goal of encouraging all eligible people go and register to vote in the upcoming general elections. We elect, we pay and they deliver," said Mtimba
He said people should know that for them to be able to vote in the elections, they should register by the end of the first 12 days after the nomination court.
"Some people thing the registration exercise has ended but that is not correct; the process continues at various ZEC offices until 12 days after the nomination court. We would like to encourage particularly the youth and first timers to go and register to vote so that they will be able to make their voting debut this year," said Mtimba.local
Share !