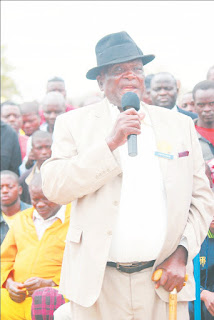 CHIREDZI - With the knife hanging over the heads of all the four Chiredzi Members of Parliament (MPs) over links to the vanquished G40 faction, Chief Tshovani has come out fighting from the corner of the pinned legislators saying the people should decide the fate of their leaders.
A motion has been moved to expel Kalisto Gwanetsa, Darlington Chiwa, Robert Mukwena and Denford Masiya from Zanu PF but Chief Tshovani believes the people pushing the agenda are afraid of competition in the coming elections.
"It is clear that those who are pushing for the expulsion of the seating Chiredzi MPs are aspiring candidates themselves.
"The electorate should be given the power to decide their fate by way of ballot because it seems those who are fighting for their expulsion have no grassroots support," said Chief Tshovani.
Recently, War Veterans district chairperson Killer Makuni handed over a list of allegations to Victor Matemadanda, Secretary General for Zimbabwe National Liberation War Veterans Association, indicating that Chiredzi's four MPs should be relieved of their duties.
Matemadanda later summoned the MPs to Harare to answer to the allegations.
Last month Zanu PF Masvingo provincial chairperson Ezra Chadzamira clashed with his deputy Ailes Baloyi who had presented a paper that Chiredzi District had resolved to expel the MPs, a move shot down by Chadzamira saying they should mend broken fences and not widen rifts.local
Share !