Home » Local » DDF has one grader for whole province

DDF has one grader for whole province 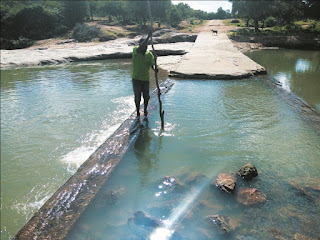 DDF, The damaged Save Drift Bridge near Berejena Mission in Chivi was repaired last year

MASVINGO – The District Development Fund (DDF) has only one grader which is supposed to service the road authority's 3 810 km network to the highest possible standards, it has been learnt.
DDF Masvingo provincial coordinator, Marasa Gutukunuhwa revealed the dire state of affairs at the institution while responding to questions from TellZim News on why the damage wrought on many roads by La Nina - triggered floods remain unrepaired one year on.
He attributed the grim state of the roads and bridges in the seven districts of the province to lack of equipment to carry out adequate maintenance work.
"There is a massive workload but no proportionate resources to match the amount of work that needs to be done. We only have one grader which is supposed to work on the long network of secondary roads that falls under our ambit.
"It is this lack of capacity that obliges us to put some our roadworks to tender. Last year, we contracted a number of companies to work on some of the roads but we had many of those contractors pulling out before completing the work due to breakdowns of their equipment, leaving behind incomplete work," said Gutukunuhwa.
He said the motor-grading of the Panganayi - Chinorumba Road in Zaka was aborted midway because the contractor who was working on it pulled out as his equipment had developed mechanical problems.
"That was also the case with work on Ruzambu Road in Mwenezi; the contractor pulled out before completing the work because his equipment broke down. The same also happened with our two contractors in Chivi," he said.
Despite the challenges, the DDF, using its own grader, successfully rehabilitated many roads including the Mutero - Makwiza Road in Gutu and Zano - Veza Road in Zaka. A total of 42 km of roads in Bikita and 53 km in Chiredzi were motor graded.
Tyre-dragging was done on a total of 816 km of roads while towed grading was done on 2 180 km of roads across all the seven districts of the province. Motor-grading was done on 625 km of roads while other works included culvert maintenance, verge clearing, gravel patching, signage installation, re-gravelling and gully reclamation.
Other projects included the rehabilitation of the Save Drift Bridge in Chivi as well as the Fuwe Panganayi and Lower Shange bridges in Zaka.
The DDF water section carried out maintenance work on hundreds of boreholes and also rehabilitated Nyamakwe, Stanmore and Mushandike irrigation schemes.local
Share !