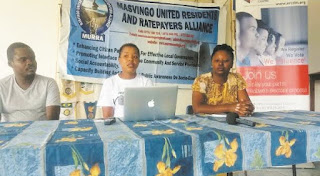 Represantatives from Cotrad, ERC and Murra

MASVINGO - The Election Resource Centre (ERC), in a joint press conference with the Masvingo United Residents and Ratepayers Alliance (Murra) and Community Tolerance Reconciliation and Development (Cotrad) last week called the Zimbabwe Electoral Commission (Zec) to do more to solve cases of intimidation against registered voters.
It has been widely reported that some Zanu PF leaders and traditional leaders are demanding that registrants reveal their registration slips for the recording of serial numbers if they want to access food aid.
ERC communication advocacy officer, Tatenda Mazarura said Zec should up its game in curbing the intimidation of registrants especially in rural areas.
"Zec must immediately instruct the Zimbabwe Republic Police (ZRP) to investigate and arrest offenders who demand serial numbers.
"Zec must take immediate action and call to order political parties and individuals that are responsible for the harassment and intimidation of potential registrants. Zec must be guided by the code of conduct of political parties and candidates contained in the fourth schedule of the constitution.
"We urge Zec to put an immediate stop to the voter registration exercise in areas where the demand for serial numbers is rampant until a conducive environment obtains," said Mazarura.
"Though Zec has released statements castigating some of the malpractices and human rights related violations, we, as civil society organisations, remain worried by Zec's failure to act on the violations," said Mazarura.top news
Share !