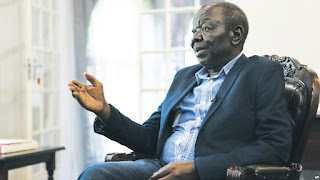 MUTARE – MDC-T secretary general, Douglas Mwonzora last weekend scorned party members who are fiercely jostling to succeed Morgan Tsvangirai, saying the ailing veteran opposition leader will stay on despite suffering serious health challenges.
Mwonzora was speaking at a rally organised by the MDC Alliance at Chisamba grounds last Sunday.
Tsvangirai's recent indications that he may step down due to poor health triggered serious divisions among party stalwarts who have positioned themselves to take over from the cancer-stricken opposition leader.
"There are some people who say President Tsvangirai is sick but let me tell you there are other leaders who ruled regardless of poor health. Nelson Mandela had cancer but he ruled after being released from prison. Zambian President Edgar Lungu was sick when he cast his vote but today he is still there," said Mwonzora, who is said to be interested in Tsvangirai's post himself.
Other leaders who have positioned themselves to succeed Tsvangirai are the party's three vice presidents Dr Thokozani Khupe, Elias Mudzuri and Nelson Chamisa.
Speaking on the same occasion MDC-T youth leader Happmore Chidziva accused the ruling Zanu PF party for being involved in an intense social media campaign to finish off Tsvangirai.
"Zanu PF may kill Tsvangirai on social media and newspapers saying he is gone but let me tell you that his vision to a new Zimbabwe will never die," said Chidziva.top news
Share !