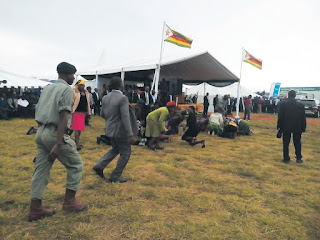 MVUMA – Many women who attended President Emerson Mnangagwa's mini rally at Mvuma Stadium last Saturday wept hysterically when it was announced that first lady Auxillia Mnangagwa will not be contesting to retain the Chirumhanzu-Zibagwe seat.
President Mnangagwa told the crowd which braved the drizzle that his wife had relinquished the post of MP to concentrate on her new role as first lady.
Some women, however had started crying long before President Mnangagwa had announced the 'sad news', leading to suspicions that it could have been mere theatrics or a stage-managed show of emotions.
Mnangagwa said Chirumhanzu-Zibagwe had to choose another representative, with Midlands provincial youth chairperson Prosper Machando believed to be the most likely replacement.
Machando is respected by the local party leadership and supporters for 'bravely defying former G40 youth boss, Kudzanai Chipanga, when it was risky to do so.'
Emmerson Mnagwagwa Jnr, another person identified only as Zvidzai, a Mrs Juru and an ex-soldier identified only as Dhlamini are also said to be planning to contest for the seat.
Many insiders, however, dismissed Mnangagwa Junior's chances, saying the President's son was not interested because the first family feared raising accusations of creating a dynasty.
"The President is a level-headed person so he knows such posts are awarded based on seniority and traceable records in the party. He will never let his son contest here," a source said.
Another source said it was a foregone conclusion that Machando will take over because he was the most favoured.
"He enjoys the goodwill of the first family due to the work he has done. The same applies to such prospective councillors as former Chegutu DA Makanzeyi Jecheche. Theirs is a done deal," the source said.
When contacted for comment, Machando said many people had approached him, asking if he could represent them.
"Our President always say 'the voice of the people is the voice God' so who am I to reject their request. What I have been taught in the party is to listen to people and not to force myself onto them," said Machando.local
Share !