Home » Top Story » MDC alliance sums it up all

MDC alliance sums it up all 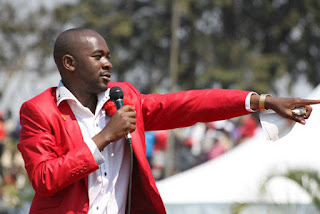 MASVINGO – All the seven MDC alliance principals last weekend thronged Mamutse Stadium and rallied behind Nelson Chamisa as acting leader of the coalition while denouncing rivals who are setting up a parallel opposition alliance.
Tendai Biti, who is one of the principals and president of the People's Democratic Party (PDP), rattled feathers when he also endorsed Chamisa as acting president of MDC-T.
The move was seen as deliberately spiteful of Elias Mudzuri, who is locked in a vicious power struggle with Chamisa and is also claiming to be the legitimate acting president of the party in the absence of Morgan Tsvangirai.
MDC-N president, Professor Welshman Ncube also strengthened Chamisa's ground in the party and alliance by claiming that before leaving for his latest medical treatment in South Africa, Tsvangirai called him and urged him to work with Chamisa for the success of the alliance.
"Tsvangirai called me to his home and told me his vision. He said we should go back and mobilise people to vote against the junta. He said athough he will not be there in person himself due to illness, he was giving us Chamisa to speak on his behalf.
"On that day, he said 'Prof, you should help Chamisa to defend the alliance. Even if it means to defend it using your lives go and defend that alliance'," said Ncube.
Speaking at the same event, the exuberant Harare Central legislator Murisi Zwizwai said the alliance was behind Chamisa as the acting president.
Along with many other speakers, he denounced 'Cape Town', in apt reference to a meeting organised in the South African city earlier this month to try and bring together Zimbabwe's disparate opposition forces.
The meeting was attended by such personalities as Mudzuri and members of his faction in MDC-T including Thokozani Khupe, together with other opposition leaders like Joice Mujuru and former members of Zanu PF's vanquished G40 faction.
"We have an alliance which has brought us all here, there is no other alliance that is going to be formed in Cape Town which will replace this one, and no one will take advantage of Tsvangirai's illness to make new arrangements with Mujuru and G40. That will not happen! The acting president is Nelson Chamisa and he is here," said the boisterous Zwizwai.
Other principals including Agrippa Mutambara and Jacob Ngarivhume also voiced their support for Chamisa, saying there was no need for the opposition to fight on its own in the face of a resurgent Zanu PF.
In his speech, Chamisa promised to deal with the power struggles in his party 'by next week', saying plans were in place to unify the disparate factions.
He acknowledged the presence of Mudzuri, praising him for showing up at the rally despite their differences.
"Don't stress yourself with issues being raised that there are squabbles in MDC-T. When the party was formed, it was a party for workers not an individual. It will go back to the people and stay with the people.
"I thank my elder brother Mudzuri who is here. When there are differences, there are differences but two hands are better than one. By next week, you should expect all this to be over and we will tell you where we stand. Leadership issues will be addressed soon," said Chamisa to the cheer of the gathering.top news
Share !