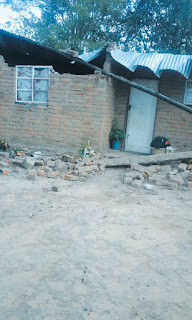 MWENEZI - Aleck Livombo, who resides at plot 56 Altornburg under Chief Chitanga, was on Wednesday last week left destitute after the messenger of court, who was armed with an eviction order, reportedly demolished his houses while all his property was still inside.
Livombo's three-roomed house and a kitchen hut were destroyed to pave way for Talent Munda who was granted the ownership of the plot by the Magistrates' Court.
Speaking to TellZim News, Livombo accused his two sisters and brother of conniving to sell the plot which used to be owned by their late mother.
"The messenger of court had earlier on came on Tuesday to give me a 48-hour ultimatum to vacate the land. When they came on Wednesday, I was not present but my wife was there. So they came and destroyed my house while all the property was inside.
"I had been living there with my mother since year 2000. It is unfortunate that my two sisters and brother connived during mother's last days and sold the property to someone elese without the knowledge of all of us as a family.
"I have nowhere to go and with the current rains, I am really in dilemma so I have engaged a lawyer," said Livombo.
Efforts to get a comment from the Mwenezi messenger of court were fruitless by the time of going to print.local
Share !