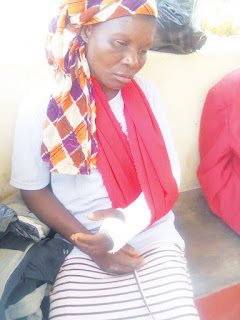 MWENEZI - Masvingo provincial magistrate Langton Ndokera has bemoaned the increase in cases of women abuse in the district which he described as one of the least safe for females.
Speaking during a court session as part of his visit to Mwenezi on circuit, Ndokera said the high number of violence against women was worrying.
"For the few weeks I have been here, I have realised that this is one of the worst districts in terms of women abuse. Men seem to take women as rags that they can use and later on dump but that cannot be tolerated," said Ndokera.
Last week, 41-year-old Prisca Ndoro of Zvirikure village under Chief Neshuro was left nursing a fractured hand after her husband Tafara Nyaku, who was drunk, allegedly assaulted her with open hands, fists and a log.
After the attack, Ndoro was rushed to Neshuro District Hospital where she received treatment.
Joseph Maweni, a lawyer, said some serious sensitisation work was needed to fight domestic violence which he said seemed to be driven largely by patriarchal attitudes in Mwenezi.
"We are dealing with a deeply patriarchal society so you find that a man may begin to ill-treat some of his wives if he fails to adequately provide for them. The idea would be to force them out and give himself some sort of relief from burdensome economic responsibility.
"There is need for concerted sensitisation programmes by civil society and government. There are several forms of abuses which are being perpetrated on a daily basis but a great deal of those cases go unreported due to lack of knowledge," said Maweni.local
Share !