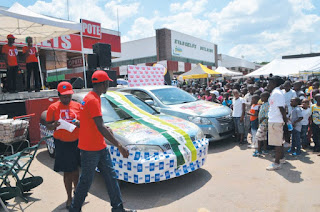 Pote Holdings marketing manager, Kudzai Kanjanda  reads out 80 prizes that were available at the Christmas Drive Away Promotion last Saturday

ZVISHAVANE - Pote Supermarkets, a subsidiary of Pote Holdings, last week Saturday held its first draw for 2018; the Christmas Drive Away Promotion, which saw many people walking away with prizes.
The big winners included Cynthia Masukume of Maglass suburb who won a Nissan Blue Bird Silphy and Egnata Dhimuri of Mandava surbub who won a Toyota Camry.
Masukume could not believe it when the car keys were handed to her, saying not even in her wildest dreams had she imagined such a thrilling occasion.
Likewise, Dhimuri said she had never thought she could possibly win and be able to drive her own car, thanking the grocer for making what she called farfetched fantasies become reality for its customers.
"We are blessed to have Pote in this community. We thank them for having love for this community and making life more enjoyable for us," said Dhimuri who said she heard her name being called on YA FM when she was busy preparing some fish she had bought from Pote Supermarket.
Civil Service Commission district human resources manager for Zvishavane, Richard Mukwindidza, who was the guest of honour at the grand occasion, applauded Pote Holdings for its corporate responsibility principles.
He said the company has consistently proven that it does not exist merely to make profit but to uplift the community as well.
"I am humbled by the service that Mr. Anthony Clver Pote and his team are offering to the community. Apart from the low prices that we enjoy in their shops, we continue reaping rewards from the business," said Mukwindidza.
FBC bank donated 80 prizes which included wheel barrows, ox drawn ploughs, solar panels and many more while National Foods and Greens Supermarket donated the cars.
Entertainment was headlined by Dendera music guru, Suluman Chimbetu who kept the thrilled crowd on the toes.business
Share !