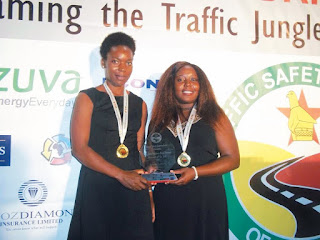 Tellzim News, the most sought after regional newspaper in the country, has won yet another national award for its outstanding coverage on road traffic accidents.
Two of its interns, Tinomutenda Chatikobo and Memory Rasa scooped the Best Student Reporter of the Year and Second Runner-up respectively at the just ended fifth edition of the Road Safety Journalistic Awards (RSJA) held in Harare last Friday.
The media house was also nominated for the Best Media House of the Year Award which was eventually won by the Sunday News.
Chatikobo and Rasa beat many other interns from national and community newspapers to win the prestigious awards.
Chatikobo received $700 cash and a shield for the grand prize while Rasa went back home $200 richer.
Minister of Transport and Infrastructure Development Dr Jorum Gumbo hailed all the winners for a sterling job saying the media play a critical role in fight against road carnage in the country.
"The media have a role to play in as far as the terming of the traffic jungle in Zimbabwe is concerned. The jungle behavior of some road users, unlicensed drivers and those bribed to obtain driving licenses must be exposed. We depend on our media and I am very happy for events such as these as they encourage other journalist to work and expose such corruption," said Gumbo.
He also took a dig at the VID officials whom he accused of corruptly issuing drivers' licenses.
"There are a lot of corruption stories at the VID. I have received several reports about how they connive with driving schools to fraudulently issue licenses. That must come to an end," said Gumbo.
"This is surely unacceptable. Prompt action especially against corrupt officers must be taken. This year, we will deal with everyone and we will visit everywhere to assess how drivers' licenses are being issued," he added.
Chatikobo and Rasa are media students at Great Zimbabwe University (GZU) and are currently attached at TellZim.
Andrew Kunhambura of the Financial Gazette scooped the Best Reporter of the Year (print) while Tawanda Gudhlanga and Andrew Neshamba were best for radio and television respectively, with each walking away with $700 and a shield.top news
Share !