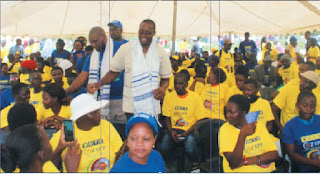 Kasiyamhuru greets party members and supporters at the rally

ZIMUTO - Zimbabwe Partnership for Prosperity (ZIPP) president Blessing Kasiyamhuru has challenged young people to take charge of matters of the national economy by involving themselves in politics.
Addressing Zimbabwe Partnership for Prosperity Youth Forum (ZIPPFY) members from Masvingo province at a rally held at Zimuto business centre over the weekend, Kasiyamhuru urged the youth to appreciate the fight started by their elders and carry the work forward.
"As ZIPP, we want solution-oriented youths who appreciate the political freedoms brought by our forefathers and take responsibility of the future through participation in the affairs of the country. The youth have a duty to participate in efforts to revive the economy of the country," said Kasiyamhuru.
He said the youth must not wallow in their misery and resort to blame games without taking action to determine the destiny of the country.
"Our problems are political and economic. We want youths that participate in politics by registering to vote and going to vote on election day. They must also be actively involved in finding solutions to revive the economy and reduce poverty," Kasiyamhuru said.
He said ZIPP was fully capable of transforming the economy of the country and will involve the youth in every step of the way.
To empower young people, he said, a ZIPP government will introduce courses in leadership, public administration and governance once elected into power.
ZIPPFY Masvingo provincial spokesperson, Ngonidzashe Paradza said the youth in the party will field candidates to contest for position of councillors and Members of Parliament (MPs) in the upcoming general election.local
Share !