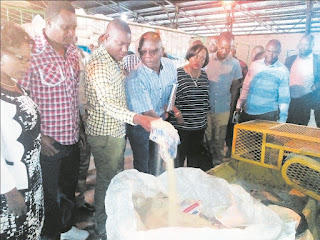 Mutsambiwa (in glasses) with members of the committee

CHIREDZI - Tongaat Hullet Zimbabwe has pleaded with government to ban the importation of sugar into the country, arguing that on its own, the company was capable of satisfying the domestic market.
The company's request is supported by smallholder indigenous farmers like the Zimbabwe Sugarcane Development Association (ZSDA) which in 2015 demonstrated against the presence of imported sugar on supermarket giant TM's shelves.
Tongaat Hullet told the Parliamentary Portfolio Committee on Lands, Agriculture and Rural Development which visited Chiredzi last week that local sugar producers were fully capable of meeting domestic demand.
Aiden Mhere, an executive responsible for operations at the sugar giant, said their two sugar mills in Hippo Valley and Triangle produce an average of 600 000 tons of raw sugar per year with 70 percent of all that sold locally while the rest is exported.
Mhere said on an average per capita consumption of 22 - 24 kg per year, the country needed an average of 350 - 400 tons of sugar including for industrial use by companies like Pepsi and Delta.
"We have two sugar mills that can produce an average of six hundred thousand tons of raw sugar per year. We can later sell between 60 - 70 percent of the sugar at local level depending on the year.
"On average per capita consumption of 22 - 24 kilograms of sugar per year, we calculated and found out that we need about 350 - 400 tons of sugar per year meaning we can supply the nation at 100 percent throttle and we can as well export the remaining.
"Our production capacity can sustain local consumption in all areas where sugar is needed. We also export sugar to the European Union, Botswana and America every year," said Mhere told the committee.business
Share !