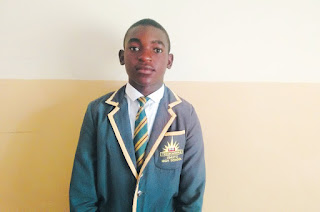 A Zimuto High pupil has proven that 'A' level can be done in one year after he sat for the 2017 'A' level Maths and Physics exams, passing them with flying colours.
Maxwell Chazireni (17) who is now in upper six, got an A in Maths and C in Physics, scoring eight points.
Chazireni, who is doing Maths, Physics, Chemistry and Biology, said he has always liked to stay ahead of conventional systems.
"I was studying alone for the better part of the year, but later joined the exam classes in the third term. A few of my teachers believed in me, while others thought it was madness for me to sit for exams with my seniors.
"I had to register as a private candidate because due processes could not allow me to sit as an internal candidate from the exam classes," Chazireni said.
Zimuto High School head, Harris Mashava said Chazireni has motivated other pupils by proving that 'A' level can be done within a year.
"The precedent he has set gives confidence to his peers, as he has proved that hard work pays. As a school, we are proud because he has raised our flag very high," Mashava said.
Chazireni is doing the remaining two subjects; Chemistry and Biology, together with Physics that he desires to pass with an A when he sits again either in June or November this year.education
Share !