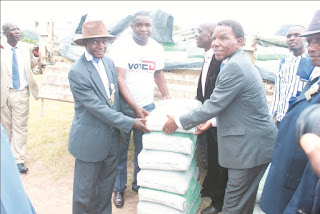 Dr Zivhu (centre) with Headman Madzivire (left), Gutu DA Hlavati and Chivi DSI Gwamuri during the handover of the donation

NGUNDU – Chivi Rural District Council (RDC) chairperson, Dr Killer Zivhu has declared his interest to contest for the Chivi South parliamentary seat, saying the time he spent with the local authority has adequately prepared him for bigger responsibilities.
Zivhu was speaking at Shindi Secondary School, Ward 26, where he donated 2 000 bags of cement to 50 schools as part of his efforts to improve educational facilities in the district through the second phase of his village ZimAsset initiative.
He promised to source for more cement for schools if the cement current donation is not enough for the work at hand.
"I am now ready to go to parliament. When the time for primaries come, I will come to you. I have already told my elder brother here (incumbent Chivi South Member of Parliament, Mafios Vutete) that this time around we will lock horns in the primaries. There is no offence in that. I am ready to go to parliament if you agree," said Zivhu amid applause from the large gathering which included Vutete himself.
The declaration of interest, which did not seem to surprise the gathering owing to the work that the philanthropist has carried out in the district and beyond, was endorsed by all speakers including Chief Shindi.
"Dr Zivhu is a son of this land and we are proud of the work he is doing for the development of our communities. His hard work and generosity is a matter of public record not only in Chivi but in as faraway places as Nyanga. Who are we then to say such a leader should not go to parliament? We say to him please go, you have our full backing," said Chief Shindi.
Recipient primary and secondary schools included Dikwindi, Shindi, Sadzangwena, Chihaya, Dzingirai, Nyahombe, Simudzirai, Matanda Maviri, Gororo, Zunga, Shongamiti, Chebvumbi, Madzivire, Ngundu, Neruvanga, Vutete and Runesu.
Zivhu later told TellZim News if he makes it to parliament, he would use the new position to bring more opportunities to Chivi.
"I would be in a position to attract more respect from the people who can help our communities grow therefore, it would be an opportunity to attract more goodwill and investment," said Zivhu.
He praised Rtd Col Manasa Mahapa, who was also present, as well as other members of the Chivi Sons and Daughters, a local resource-mobilisation group, for making contributions towards the cause.
He urged successful people with roots in Chivi to come and contribute to the development of their areas.
Other dignitaries present were Chief Nemauzhe, headman Madzivire, Chivi District Schools Inspector (DSI) Isaac Gwamuri, Gutu district administrator (DA) Wafios Hlavati (who represented the Minister of State for Masvingo Provincial Affairs, Josaya Hungwe), councillors and school heads.politics