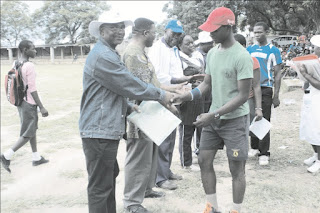 MASVINGO - Zanu PF Masvingo North aspiring Member of Parliament (MP) James Moyo recently donated stationery items to winning athletes who competed in the district schools competitions held at Victoria High School last week.
The donation saw more than 78 pupils from different schools receiving such items as books, ball point pens, note books for team managers and gold medals.
Addressing athletes and other pupils at an event where he stood as an invited guest, Moyo encouraged athletes to take sports seriously, pledging to continue supporting their exploits.
He said leaders had a duty to support schools and the development of talent among school children.
Moyo has made his intentions to contest in the upcoming general elections clear, saying he has the best interests of Masvingo North, which is currently held by Davis Marapira, at heart.
"The constituency has immense potential but that has never been supported. There is a lot that needs to be done to develop this potentially rich constituency and set it up as an example for other people.
"We need to start new irrigation projects and expand the existing capacity. A Member of Parliament needs to be there to assist attracting investment and helping the area to develop. We don't want to have people living like they have always lived; without any notable changes in their areas and their lives," said Moyo.
He said his social responsibility work was meant to help in all areas that need intervention and would not stop even after the elections.
"There are people who go to the people simply to look for their votes and disappear thereafter. I want to be different. It is not all about the vote, but about working with communities and putting our heads together for the sake of development. Giving back to the community must not merely be for the sake of advancing one's own political interests," Moyo said.
He also said he had plans to support the empowerment of women and young people by helping them to set-up income generating projects.local
Share !