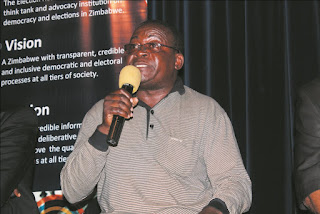 GWERU – Former Minister of State for Masvingo Provincial Affairs, Kudakwashe Bhasikiti last Sunday showed up at the MDC Alliance rally in Mkoba where he denounced the ruling Zanu PF party and pledged to support the coalition.
When Bhasikiti was given a chance to speak, he took the opportunity to endorse Nelson Chamisa's candidature for the presidency.
Bhasikiti told the fully-packed Mkoba Stadium that voting Zanu PF in the upcoming elections would be tantamount to endorsing 'the junta'.
"I am here to tell you what I noticed about this so-called 'new dispensation. It is not a government for the people by the people but a government of those who facilitated the soft coup.
"I have been in Zanu PF, have tried rejoining them but really, I will tell you from experience that if you vote Zanu PF in the next election, you will be voting in a junta which you will find hard to remove," Bhasikiti said to loud applause.
TellZim News later approached Bhasikiti to seek clarification on his recent attempts to be readmitted into the ruling party.
"It is true, I have tried going back to what I called my home only to realise it was not warm. Those accommodated there are only those from the Lacoste faction. I then wondered if Lacoste alone could develop the nation.
"That is the problem we are facing now; Lacoste trying to run it all by themselves. That can't be," Bhasikiti said.
After being expelled from Zanu PF for links to the Gamatox faction of former vice president Joice Mujuru in 2014, Bhasikiti became a founding member of Zimbabwe People First (ZimPF).
Factional fights in the party saw him going it alone and running as an independent in the 2017 Mwenezi East parliamentary by-election.
He however withdrew from the race citing an uneven playing field and intimidation of his supporters by Zanu PF.
After the ouster of Robert Mugabe as president, Bhasikiti showed up at a Zanu PF Provincial Coordinating Committee (PCC) meeting in Masvingo where he knelt before Josaya Hungwe to beg for readmission into the party.
"Now that Zanu PF has redeemed itself, we have decided to come back because we have always been Zanu PF. I told Didymus Mutasa and Rugare Gumbo that we should dissolve the party and go back to our roots and I assure you that they are all coming back to their home," Bhasikiti said then.local
Share !