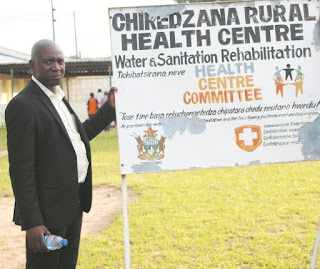 ZAKA – Zanu PF youth league member, Talent Chivange last week promised the people of Chiredzana, headman Chamburukira under Chief Bota, that he will work hard for the improvement of access to basic services in an area he said did not deserve the neglect it currently suffers.
Chivange, who is looking forward to contest for the Zaka East parliamentary seat in the upcoming elections, has set for himself some targets that include upgrading the local police base so that it can have all the requisite facilities of a police station.
Last week, he toured the premises of the sub-standard police base, which was built by the community to improve safety and security, as part of his outreach programme to the area.
He revealed his commitment to the development Chiredzana, a very remote area known for its notorious cattle rustlers that seem to ply their illegal trade with reckless abandon.
Chivange's programme also encompassed the sponsorship of the Zaka East Sports Gala which was held at Matara Secondary School where several community football teams fought it out for a wide range of prizes.
The youthful politician pledged to furnish the police base and also made a commitment to improve conditions at the under-resourced Chiredzana Clinic which again the community built on its own in response to the poor access to healthcare services in the area.
"I will send the 18 locks needed here anytime next week (this week). I'm pained to see the lax security here at a time when there are many reports of burglaries, robberies and rapes. There is a lot of work that needs to be done here. The registrar general's office is also derelict and, therefore, is in need of urgent attention," said Chivange.
Chiredzana Police Base member-in-charge, Tafadzwa Kadondo said the place was put up as a matter of emergency, serving a wide area with nine business centres, the furthermost point being 34 km away.
He said the two police officers that are at each time deployed there were not enough for the job in hand, and have always operated without proper furniture and decent accommodation.
There are also no cells at the base, such that when a suspect is arrested, he/she shares the same room with the police officers.politics
Share !