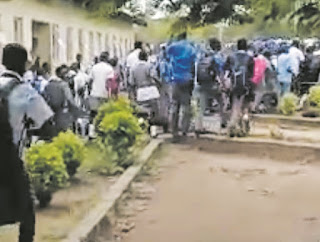 Pupils roam freely during the demo

CHIPINGE - Takwirira Government High School pupils last week took matters into their own hands to demand answers on what happened to the bus levy they said they had been paying since 2015.
The toyi-toyi forced the school head, John Madhuku, to call the police and the District Schools Inspector (DSI) Richard Gabaza to come and help pacify the situation.
The singing pupils blockaded the Chiredzi-Checheche Road and vowed to continue with their action until the school head brought the long-promised bus.
The strike started on March 02 and went on for three days after which some semblance of normalcy was created following long hours of negotiations led by Gabaza.
The protest action, however, resumed on Monday with the children reportedly blocking the road again and inconveniencing cross-border buses. Things only got better when police addressed pupils and assured them that officials from the Education ministry will come and address them.
When TellZim News tried to get a comment from Madhuku, he dropped the call as soon as the journalist introduced herself. He did not pick all the subsequent calls.
Gabaza, however, acknowledged that there were problems at the school and said attempts were being made to solve them.
"I managed to calm the students on Friday. The main issue is about the bus and we are still investigating the allegations. The reports we received from the school is that the money is not yet enough for the dealer to release the bus. It is a Zhengzhou Yutong and it costs around US$180 000 and the school says it has paid under $100 000.
"I also received the information that the bus company advised the school to apply for a loan from the bank if they wanted the bus urgently. We are however carrying investigations on all the allegations being raised," said Gabaza.
A parent who spoke on condition of anonymity accused the Madhuku of maladministration, arrogance and shortchanging parents.
"There is no communication whatsoever between the administration and the staff as well as between the staff and parents. The headmaster must show us the bus that we have been paying for or he must at least give us a good explanation," the parent said.local
Share !