Denes brings another gold from Moza 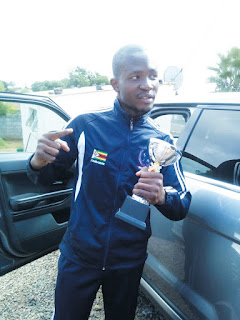 Brendon Denes, a Great Zimbabwe University (GZU) Political Administration student who of late has been performing wonders in the field of boxing, has added yet another strand to his growing band of gold medals.
A few weeks ago, the 23-years-old boxer was at the BCI Complex in the Mozambican capital, Maputo, for the 2018 Zone 4 Light Welterweight Championships.
He brought back gold after boxing out a Swazi competitor in the preliminaries before proceeding to the semis where he defeated an opponent from the Seychelles.
In the finals, he overcame strong rivalry from a Mozambican challenger to emerge as the light welterweight champion.
Boyka, as Denes is known in the boxing circles, now has 13 unblemished gold medals to his name, having fought in many national and international. In total, he has participated in 43 local and six international fights.
"I am pleased with my latest achievement which came as a result of hard work. I thank God for giving me strength to consistently build my career with some remarkable success. I thank those who are guiding me and travelling with me whenever there is something to do," said Denes.
It was Charles Manyuchi who spotted Denes at Chikwarakwara Open Boxing Arena at Mucheke Hall in 2012 and went on to nurture him after noticing that the boy exuded so much potential.
"I owe this to the Charles Manyuchi Sports Academy. Manyuchi made me a national boxing icon by finding me a chance to take part in the national youth games. Since then, it has been an upward surge for my career," said Denes, who is doing his work related learning with City of Masvingo's housing department.
He is now looking forward to the XXI Commonwealth Games to be staged in Australia between April 4 and 15 this year.sport
Share !