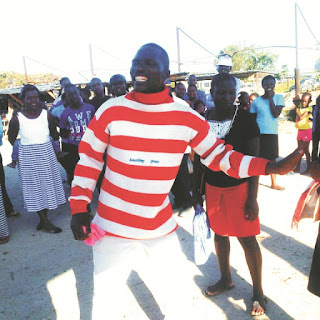 MASVINGO – An ex-convict from Mutoko who frequented the courts to answer to 70 counts of such serious crimes as rape and robbery has turned to preaching and is currently in Masvingo town where he is spreading the word of God and exposing his evil past.
Forty-three-year-old Christian Bvunzawabaya Kabasa said he spent most of his time behind bars having started stealing at a very tender age.
Kabasa said he was initiated into criminal activities bythe late notorious robber and murderer,Stephen Chidhumo, days after meeting him in Nyamapanda.
"When I met Chidhumo, we had an eye contact and there was a demonic bond. I just liked him though I didn't know who he was. We met for three days and never talked. I then went to look for him at a club where he had booked a room. When I entered his room, I saw guns and other tools and he taught me how to use them," said Kabasa.
His first mission, as instructed by Chidhumo, was to steal a car belonging to another man who had also booked a room at the same place. He was however arrested by the police while trying to drive the stolen car into Mozambique and was later sentenced to three years behind bars. He however received strokes of the caneinstead of being sent to jail due to his age.
He was to be caned again seven more times due to different criminal offences he committed as a juvenile.
After his conviction on the car theft charge, Kabasa moved to Murewa and finally to Harare where he got involved in all sorts of criminal activities that saw him spending no more than three months outside of police cells.
"Hapana mhosva yandisina kupara in my life, hapana chandisina kuba kusiya kwemunhu chete. I did armed robbery, rape, cattle rustling carjacking and any other criminal activities you may want to think of. I stole cars with alarms and tracking systems," said Kabasa.
Finally, he was arrested in the year 2000 and was charged with 70 counts and was convicted on 50 of them. He was sentenced to 36 years but was later released through a presidential pardon following a long illness while in Chikurubi Maximum Security Prison.
"After serving seven years, I started experiencing fits attacks (pfari) and that it could not be treated. I later underwent a CT scan of the brain and was diagnosed with a diseases called toxoplasmosis which the doctors said could not be treated and the condition could not be reversed," he said.
Kabasa said he owed his repentance to Mai Pazvakavambwa, Pastor Mufema, and a Sister Angie of Faith Ministries International who came to preach at the prison.
"They would come to preach to us and they will bring some goodies with them to help get our interest. I was baptised, but simply so that I could receive the goodies more often. One day, however, they gave me a small booklet but I spent six months before reading it. When I finally decided to read it, I did so for 77 times before understanding what the story said. When I finally understood, I was inspired so I took the story to be mine.
"There is communication which happens in the spiritual realm of demonic forces before two potentially-evil people meet. That is what happened between me and Chidhumo," said Kabaya.
He said he invited God and asked to be blessed and be freed from prison as he was terminally ill. He was then advised to put a request for a presidential amnesty in writing, which he did, leading to his release in 2012.
The ex-convict then started preaching to other people and visiting jails where he preached to inmates. He also began seeking donations from the people he would have preached to and sending those donations to inmates.
He said he had committed himself to travelling around preaching the gospel of the Lord and spreading his own testimonies. In Masvingo, he is staying with in Majange with Pastor Paul Mandala of the Life Revival Ministries.
Kabaya's story and testimonies as well as the work he is doing is available on Facebook and he can be contacted on 0771 387 262 for audio discs.local
Share !