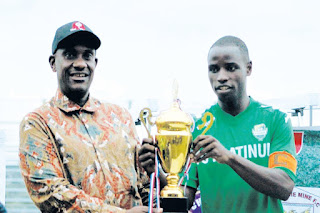 Minister of State for Midlands Provincial Affairs Owen Ncube hands over the trophy to FC Platinum captain of the day, William Stima

ZVISHAVANE - After crushing out of the African Champions League, FC Platinum won a consolation trophy in the name of the Roy Mazingi Memorial Tournament.
They lifted the trophy after thumbing their rival Shabanie FC one nil in the finals.
Roy Mazingi was a Chapungu FC goal keeper who died last year and the club hosted a memorial tournament in his honor to raise money to give to his family.
Four teams participated in the tournament among them the Shurugwi based Nichrut FC.
FC Platinum were without their head coach Norman Mapeza who was said to be not feeling well and had Lizwe Svesve standing in for him.
Svesve dedicated the victory to Mapeza whom he wished a quick recovery.
"We are happy to add another accolade to our trophy chest. This trophy is dedicated to our head coach Mapeza who is ill and getting treatment in Harare. We hope this victory will put a smile on his face and help in his recovery," said Svesve.
Shabanie FC coach Takesure Chirangwi said he was satisfied by the performance of his team saying despite the loss, they gave FC Platinum a run for their money.
"My boys played good football considering that our opponents are a big force. We may have lost but we have learned a lot. We found ourselves in the final showing that we played well. I have seen areas which need to be improved come the 2018 premiership season," said Chiragwi.
The tournament raised a total of close to US$6 000 which was handed over to the Mazingi family with the Minister of State for Midlands Provincial Affairs Owen Ncube being the guest of honor at the tournament.local
Share !