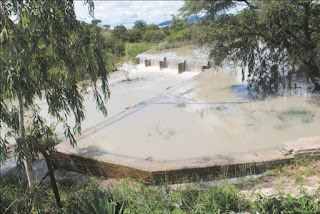 MASVINGO – Lake Mutirikwi, the second biggest inland lake in Zimbabwe after Tokwe Mukosi, has recorded the lowest water levels compared to other major water bodies in the country despite the heavy rains of the past weeks, TellZim News has learnt
According to information released by the Zimbabwe National Water Supply Authority (Zinwa), the dam level stood at 46. 5 percent as on March 09.
Tokwe Mukosi stood at 70.6 percent, Manjirenji at 89.6 percent, Tokwane at 100.5 percent, Bangala at 102.7 percent and Muzhwi at 102.7 percent full. The average national dam level stood at more than 50 percent.
Many people attributed the below average inflows into lake Mutirikwi to a wall built across a section of Mucheke River by Davies Marapira, who is the Deputy Minister of Agriculture, Mechanisation and Irrigation Development.
Much of the water flowing down Mucheke River normally ends up in Lake Mutirikwi after it joins with Shakashe River outside Masvingo town to form a sizeable tributary.
Marapira is using the water to irrigate his own farm and is reportedly not paying levies to the Mutirikwi Sub-Catchment Council as required by statutory regulations.
He has also built the dam using substandard material and without following the necessary procedures as required by the Water Act.
The Minister of State for Masvingo Provincial Affairs, Josaya Hungwe, last week told TellZim News he was waiting for Marapira's return from a foreign trip so that he could have a word with him.local
Share !