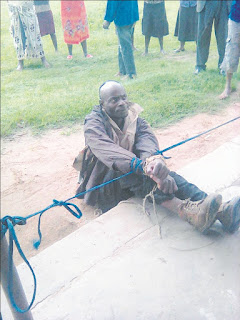 MASVINGO - Assistant Commissioner (Crime) Masvingo, Assistant Commissioner Crispen Makedenge, has advised the public to be wary of exaggerated social media reports about a wave of rapes in the province, saying the police were working very hard to solve the genuine cases that have been reported.
Ass Com Makendenge made the remarks while briefing the local media in face of what he said were sensationalised reports of alleged violent rape incidences that have gone viral on social media especially WhatsApp.
"We urge members of the public to take some of the reports they see on WhatsApp with a pinch of salt. In actual fact, there are only five incidences of rape that we are investigating, and the circumstances may be different from what is being said on WhatsApp," said Makedenge.
The police later caught Charles Matunga Magombedze, one of the prime suspects in the rape and murder of several women in Chivi district and elsewhere.
The suspected criminal was caught in a mountain near Mubheji business centre, Ngundu, with a pair of handcuffs, a pick, chicken knives, a slasher, two pots and a clay pot as well as various forms of sharp equipment most probably used for break-in purposes.
The suspect was also found in possession of female underwear suspected to belong to the women he raped.
Ass Com Makendenge thanked the community for assisting the police do their work leading to the arrest of the suspect.
Police were however still looking for two more suspects in connection with similar criminal acts in Chivi and other parts of the province.
One of the first suspect is Tarisayi Madzingo aka Zenda alias Dread of Chasiya village under Headman Masunda, Chivi district, in connection with the crimes.
The other suspects who was also still on the run is Talkmore Dumbu of Chanyungunya village under Chief Charumbira, Masvingo rural district.
Ass Com Makedenge urged journalists to take a leading role in dispelling social media falsehoods and half-truths by reporting effectively on the truth on the ground.
"The public is panicking unnecessarily so we want our newspapers and radio to do their jobs effectively so that the people can know what really is happening.
"We also rely on information that we get from the community, we appeal to anybody with information that can help in the investigation to assist us," he said.top news
Share !