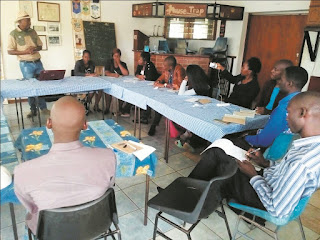 Media Centre, in partnership with TellZim News, on Friday last week conducted a workshop to encourage citizen journalists to monitor and report electoral malpractice during the upcoming general elections.
The workshop was part of Media Centre's nationwide refresher courses for citizen journalists as the country approaches a critical general election.
Media Centre director, Ernest Mudzengi described citizen journalism as critical for the promotion of access to information, saying people must take advantage of their mobile phones to expose electoral malpractice wherever it may exist.
"The country needs each and every one of us to do our part to gather as much information as possible on what is happening on the ground. It is our duty to report truthfully on what is happening for the benefit of the public," said Mudzengi.
He also said his organisation had engaged the Zimbabwe National Editors Forum (Zinef) for the purposes of getting publication space for good stories from citizen journalists.
TellZim News director Golden Maunganidze, who did much of the facilitating work, emphasised the need for the truth and accuracy so that citizen journalists do not become purveyors of what has come to be known as 'fake news'.
"There is no substitute for the truth. Always make sure you verify your facts with knowledgeable sources so that you become sources of reliable information. If you manage to make an audio or video recording and take pictures that would good because such information speaks for itself," said Maunganidze.
He, however, warned participants to be highly cautious when doing their work so that they do not compromise their security.
"Safety comes first and there is no story worth dying for. Where it is dangerous to take pictures and videos, please do not attempt to do so. There are always other ways of effectively doing the work without putting your safety in danger," he said.local
Share !