Mhunga daughter up for assault 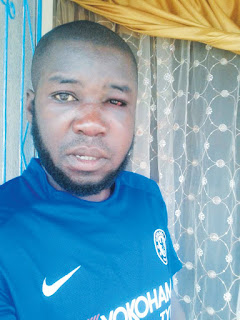 A swollen-faced Zivanai Chikwanda after the alleged assault

MASVINGO – Shamiso Tavaruva, a daughter to erstwhile successful passenger transport businessman Tanda Tavaruva, of Mhunga Bus Services, is in trouble with the law after she allegedly ganged up with one Donald Manenji to assault their friend's ex-husband.
The incident reportedly happened at Chesvingo business centre, popularly known as Sisk, on Wednesday, February 21.
The case was reported to Chikato Police Station and is pending before the courts of law.
Sources said Shamiso and Manenji approached Zivanai Chikwanda at the business centre and started to accuse him of ill-treating his ex-wife Ruth Maregwede.
Manenji is a soldier and he works in the military ward at Masvingo Provincial Hospital.
Maregwede is apparently friends with Shamiso and Manenji, and she reportedly drinks with them at the business centre on occasional basis.
The pair allegedly started beating Chikwanda in the face using fists, and were reportedly joined in the brutal assault by Maregwede who was close by.
Chikwanda, who reportedly suffered severe face injuries and became unconscious for a while, was then forced into the boot of a car and driven to Chikato Police Station.
At the police station, Shamiso and Manenji reported that they had found Chikwanda beating his ex-wife and had restrained him.
Chikwanda was then arrested and he spent two nights in police cells but the case could not be heard in court because the victim's medical affidavit contained gross errors of omission.
Manenji reportedly prepared the affidavit but did not append his name on it as he is not a medical doctor.
It was then recommended that the case proceed by way of summons with Chikwanda taking the opportunity to file his own assault counter report against his alleged attackers.local
Share !