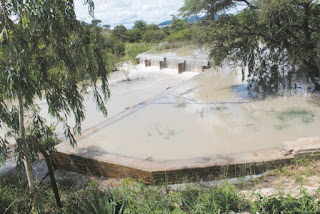 …as Runde catchment council sits to decide on controversial dam

Masvingo minister of State for Provincial Affairs Josiah Dunira Hungwe, who has been waiting for the deputy minister of agriculture Davis Marapira to return from his foreign trip so he could explain his controversial dam on Mucheke River, has said he is going to visit the site and make his own assessments before speaking to the deputy minister.
Hungwe told TellZim News that he has received calls from various stakeholders for him to intervene on the dam built by Marapira with much fear on the safety of the surrounding community and people downstream.
"I have been told about Marapira's dam and have wanted to engage him on the matter but he has been travelling a lot. I want to visit the site before I talk to him so I know what I will be discussing with him.
"Once I go there, I will summon the minister and we will talk," said Hungwe.
TellZim News has been informed that the Runde catchment council will convene on March 28 to discuss the issue pertaining Marapira's dam after the Mutirikwi sub catchment council forwarded their recommendations on the matter.
A close source privy to the developments spoke on conditions of anonymity saying the whole issue is political and requires a political solution and the Runde catchment council is likely to rope in minister of Environment Water and Climate, Oppah Muchinguri to either force Marapira to demolish his wall or pay for the water he is using.
"The Runde catchment council is going to sit on March 28 on the issue and discuss the recommendations send by the Mutirikwi sub-catchment council. Minister Marapira uses his political muscle to evade paying for the water he is using.
"We have engaged him on numerous occasions but he seems to be too busy to pay attention to the details. We hope after the meeting, the recommendations will be binding," said the source.
Marapira operates two centre pivots for irrigation at his farm which draw water from his controversial dam.
Marapira was not immediately available for comment by the time of going to print as his mobile went unanswered.local
Share !