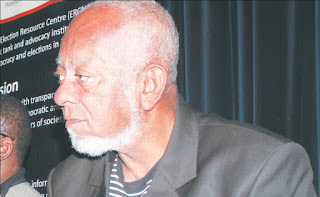 MWENEZI - More than 200 Zanu PF election agents who were deployed at various polling stations during last year's Mwenezi East by-elections have come out guns blazing against their party which they accuse of failing to honour its promise to pay them allowances.
This emerged at a Zanu PF meeting held at Rutenga Primary School last Saturday.
Directing their questions to district party members who are in provincial structures, the agents lashed out at the party leadership for making false promises.
"When (former Zanu PF secretary for administration Ignatius) Chombo addressed us at Avhunga Secondary School before the by-elections, he promised that funds for election agents were going to be disbursed but up to now, nothing has materialised.
"We were later told that there was no money and that we would receive payment in form of rice, but that has not even happened. We are now a few months before another election and you want the services of the same people whom you have failed to honour in your previous promises. We cannot operate like that," fumed one agent.
Although the leadership proposed to forward the grievances to the responsible authorities in the party, Mwenezi East Member of Parliament (MP) Joosbi Omar, who was also present, made a commitment to use his own resources to pay what is owed if needs be.
The meeting was meant to mobilise support ahead of the harmonised elections and was also attended by Mwenezi West MP, Lamson Matavire, district members from the Provincial Coordinating Committee (PCC), Rennias Muchoko, Pricilla Moyo-Zindari and Gift Mazhambe.local
Share !