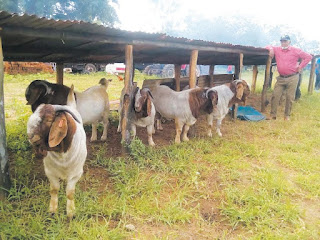 Omar marvels at the Boer goats he imported from SA

MWENEZI - Zanu PF Mwenezi East Member of Parliament (MP) Joosbi Omar has imported five male Boer goats from South Africa for the purposes of cross breeding them with local breeds.
The goats have been penned behind the constituency development office at Rutenga growth point and will be released to mate local goats that will be picked from various wards of the district.
Omar told TellZim News that the imported breeds were meant to improve goat production in the district and fight extreme poverty.
"The goats are for the benefit of the people of Mwenezi in particular and the country at large. We are going to make sure that local female goats will be picked from various wards of the district so that they mate with the imported Boer goats to produce a new hybrid.
"Every ward within the district will be incorporated into this project. The idea is to come up with a distinct goat hybrid for the district. To maintain the Boer goat, breed we have already bought a total of 20 female Boer goats that will soon be brought into the country," said Omar.
Ultimately, Omar said, the district should be able to export quality goat meat to the region and beyond.
"When a Boer goat mates with any other goat type, twins or triplets are usually produced. So we are expecting to have a mass production of goat meat for export to the Arab world where the market is readily available.
"The district has the potential to contribute more to the GDP (Gross Domestic Product) of the country. With this project and many others in the pipeline, we are going to be the envy of many people," Omar said.local
Share !