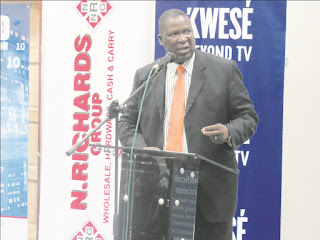 One of the members of the Reserve Bank of Zimbabwe (RBZ) board of directors, Onesime Mukumba has criticised the inflexibility in government departments and the corporate world, saying blind adherence to conventional rules was militating against envisaged rapid transformation of the economy.
Mukumba, who is former Standard Chartered Bank (StanChart) regional manager, was speaking at the 'Masvingo is Open for Business'  investment interactive dinner held last Saturday at Flamboyant Hotel.
He criticised what he called a culture of sticking to antiquated rules that serve no purpose but to delay progress.
"Most managers are not managing, they are just following the rules and regulations yet managers should be there to manage exceptions. So as long as those exceptions make sense; business sense for Masvingo to progress, as long as they make sense for the creation of employment, they must be approved," said Mukumba.
The government of President Emmerson Mnanagwa is exhorting its idea of a 'new dispensation' by which it claims that it is no longer business as usual in government.
"While the President and his ministers are saying the right things, the civil service remains rigid. They are following the antiquated act and they won't move an inch. So when you change the rules, also change the people in charge or educate them," said Mukumba.
He called for people in charge to exercise the power of discretion so that progress can be made even when the rules do not necessarily permit.
"This hotel would never have been bought if I had not bent the rules of Standard Chartered Bank to give Eddison Zvobgo the money to buy it. The same with Fairmile Hotel. The rules of the bank were saying something else, but I looked him in the face and I said, this man will pay (back the loan). I will give him the money.
"The rule of exception is what is missing, people are following rules and regulations blindly. And those rules and regulations take time to change, it is difficult for the acts to be changed….And in the meantime we are saying kutongwa kwaro, tava kuchinja mitemo, mitemo yacho haikwanisi kuchinjwa quickly enough to have the pace that we want.
"We have got the mighty Tokwe Mukosi Dam, we should have by now be generating electricity, but it will take you time if you don't bend the rules.
"The issue of dualisation is getting people sick and tired. Every time there is a date, and they say when the rains stop in April, we will begin work but nothing gets done day in day out. We want to see the bulldozers moving and so forth. What we have seen is the dualisation of a highway which is working and in very good condition. Already the bulldozers are reaching Norton on the Bulawayo - Harare highway yet people are dying on the Masvingo highway," Mukumba said
The Minister of State for Masvingo Provincial Affairs, Josaya Hungwe said he fully agreed with Mukumba and pledged to quicken decision-making processes.
"I want to tell you what I have already done. I invited South African companies to come and electrify the Tokwe Mukosi area and work is being done. I did not ask anybody because I was given the discretion by those who appointed me. So I agree with you 100 percent.
"We want people from outside the country to come and invest in Masvingo because we have the resources that they need. You have heard about the discovery of further deposits of lithium in Bikita, diamonds in Chivi and other abundant natural resources that we have," Hungwe said.
Zimbabwe National Chamber of Commerce (ZNCC) Masvingo chapter chairperson Andrew Chekani described the province as a sleeping giant which needed the efforts of everybody to awaken.
"Masvingo is a sleeping elephant in terms of business. Let's all do our part and help the elephant to rise," said Chekani.
The event, which was held to raise funds towards the rebranding of Masvingo as a province which has opened up to investors, was attended by many organisations among them Liquid Telecom, Great Zimbabwe University (GZU) Econet Wireless, Tongaat Hulett, N. Richards Group and Nyaradzo Group.
Notable individuals who attended the event include US-based Professor Ken Mufuka as well as Higher and Tertiary Education minister Professor Amon Murwira.business
Share !