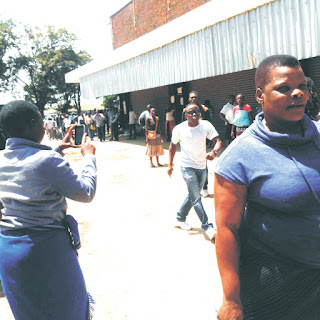 GWERU – There was drama at a council event to officially open a public toilet in Mutapa on Tuesday when an unemployed youth staged a one-man protest over jobs when the Minister of State for Midlands Provincial Affairs, Owen Ncube was giving his official address.
Privilege Desmond embarrassed the minister and was later arrested after the event which took place at TM Omnibus Terminus.
Midlands police spokesperson, Assistant Inspector Ethel Mkwende could not comment on the issue saying she needed time to verify.
TellZim News later learnt that Desmond appeared in court on Wednesday where he was found guilty of disorderly conduct and was fined US$15.
Desmond, who is a vendor, continuously told Ncube that the youth were still awaiting jobs in the factories that the new dispensation promised would be re-opened.
His protest disturbed the smooth flow of Ncube's speech as it drew much attention and backing from some vendors present, leaving the minister unsettled.
"We demand industries! Why would a whole minister move around opening toilets instead of industries in such an educated country?" Desmond shouted.
Desmond also went on to attack the police who tried to restrain him, telling them not block his plea as they themselves had jobs from which they receive allowances.
"Police don't be used! Isn't that you are wearing a uniform? Give me a work suit so that I can go and work at ZimAlloys factory. Once that is done, you won't see me complaining as I am doing now," he protested.
Other people also joined the fray and backed Desmond's plea, calling for jobs and economic re-forms.
"May you please address economic challenges before inviting us for a toilet-opening event? We also need jobs as he is saying," somebody could be heard shouting.
"What do you want us to drop into those toilets when we are hungry," another one asked.
After the event, an agitated Ncube avoided entertaining the media.local
Share !