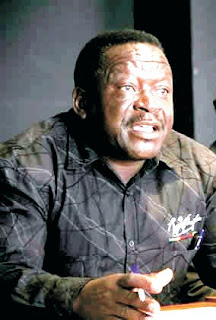 War veterans who gathered for their provincial meeting at Masvingo Poly last Saturday questioned their representative in the politburo Victor Matemadanda's sanity after he reconvened the meeting in order to speak in front of ZBC cameras.
The ZBC news crew arrived after the meeting was over. Upon realising that the ZBC news crew had arrived, Matemadanda called the house to order once again and started the deliberations for the second time just to accommodate the ZBC cameras.
War veterans who came from far away districts such as Mwenezi did not take Matemadanda's move lightly.
"This is madness, how can he do this when he knows that we have a long journey going back home. Some of us are going to use Masvingo-Beitbridge highway which is very dangerous after this meeting," war veterans could be heard saying as Matemadanda addressed them for the second time.
He literally repeated what he had said before the ZBC TV news crew had arrived.
Some said Matemadanda could have just summarised what happened in the meeting as a side interview to ZBC rather than re-starting the whole process just for the love of appearing on TV.local
Share !