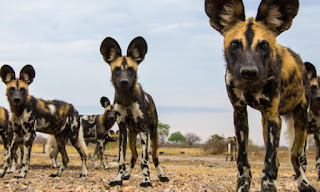 Chipinge - Villagers in the lower parts of Chipinge are living in constant fear as marauding wild dogs, reportedly escaping from the Save Valley conservancy, are roaming around attacking and killing their livestock.
Last week 20 goats and six donkeys in wards 20 and 21 under chief Musikavanhu were reportedly killed by the wild dogs.
Fears are growing that the wild dogs may end up attacking people and calls have grown louder for the responsible authorities to address the problem.
Ward 20 councillor Charles Mugidho told TellZim News that the wild dogs have become a menace and villagers keep losing their valued livestock.
"Our people are now living in constant fear because of these wild dogs. It is painful to lose livestock to animals that can be contained if the responsible authorities act quickly.
"People here are no rich and they treasure their livestock because they give them their livelihoods so we call on the Parks and Wildlife Management department to take this issue seriously," said Mugidho.
"So far we have received reports of over 20 goats and 6 donkeys killed last week. Our deepest fear is that the dogs may end up attacking people.
"We engaged the Department of Parks and Wildlife Management and they promised to come and help us once they mobilise resources. We have organised some meetings with villagers to raise awareness so that they will be aware of the menace of wild dogs," said Mugidho.local
Share !