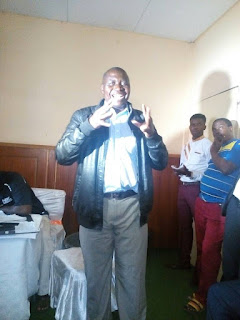 Tobias Zunguzira speaks during the meeting

GWERU – The Apostolic Christian Council of Zimbabwe (ACCZ) recently made a bizarre claim to the effect that President Emmerson Mnangagwa had the right to kill and to forgive anyone who poses a threat to Zanu PF's political interests.

"As churches, we should know that David had the power to kill and power to forgive. As churches, we mustn't then take that privilege from our leaders saying it jeopardises free and fair elections. Let the President do all it takes to safeguard his legacy," Zunguzira said.

Also in attendance was Johannes Ndanga who said churches must champion unity behind political leaders of the day in line with Biblical traditions.

"We took an opportunity to make our committee aware that we will be supporting Mnangagwa in the forthcoming election. We think all the journeying he is doing to market Zimbabwe is a good job and should be supported and applauded.

"Romans Chapter 13 says be under your leadership as they were put there by God. It goes on to say 'those who are on the throne' and that tells us no one else can come. Some say we do hero-worshiping but it's not that as we simply do what is directly quoted from the Bible. In Shona, the closure reads, 'varipo ivavo' and not 'vasipo ivavo'," Ndaga said.

Known for his fawning attitude towards Zanu PF leaders, Ndanga late last year declared that former president Robert Mugabe would never be removed from power and would rule till death.