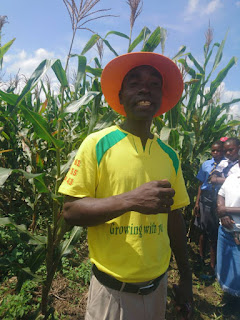 Farmers in Masvingo have been encouraged to use Agriseeds' new Zap 61 hybrid maize seed which has been seen to be suitable for much of the province's soils and climatic conditions.

Farmers were introduced to the new seed during a field day held in the Bhani area, with many farmers expressing eagerness to try the new variety.

Agriseeds Masvingo branch salesman Onai Sibanda said Zap 61 was an early medium seed which matures after 125 - 135 days depending on the area it is planted.

Over 50 farmers were invited to witness a bumper harvest by one of the farmers in Bhani, Masendeke Chipato who produced quite a lot on his relatively small piece of land.

"Despite the hot temperatures we experienced last month, Chipato produced a bumper harvest after he planted Zap 61. We recommend this new seed as it has proven to be better than others in terms of endurance and speed of growth," Sibanda said.

Rejoice Chipato, who is wife to Masendeke, said farming was a process of continuous learning with new methods emerging all the time.

"We should move away from some of our habits of sticking to the same seed varieties that we have been growing since time immemorial and embrace new ways of farming," Chipato said.

Agriseeds sales and marketing country director, Ivan Craig also encouraged farmers to use the new seed which he said could guarantee them better yields even when the rains are not so good.

He also encouraged farmers to open their own markets and sell their produce as they are rather than to allow middleman to bring in cheap stuff in exchange for maize.

"There are a lot of benefits that can be realised from maize production so we should open our own markets and not to wait for middleman to come and buy our grain. Some of these middlemen bring cheap stuff like rice, soap and second hand clothes that are not as valuable as our own produce," said Craig.